My 30s started with a breakup. He and I weren’t as compatible as I thought we were when we were in our 20s. I had chosen to stay with him too many times, talking myself out of walking out. Afraid to be alone until I finally chose to let him go.

By 31, I was living in my new apartment. I was still reckless with my money and my heart, feeling vulnerable and overly confident at the same time. I was desperately looking for my prince charming, the man of my dreams, the man who would make his wife, his queen, the mother of his children. I hadn’t realized that I needed to become the woman of my dreams first, the queen of my home, the b**** in charge.

And so I became involved with the wrong man…again. And for 6 years I woke up each day knowing that I was not where I wanted to be and he wasn’t the man for me. I hadn’t recognized that I had a voice and I needed to listen to it, but the fear of the unknown was too strong. During those 6 years, I sought signs everywhere and waited for something to find me, guide me…rescue me.

Turning 40 was not something I was looking forward to at that time. I was afraid that I was never going to meet that man or that I was never going to have children. I tormented myself with thoughts like “my grandmothers are old and they’ll never meet my children” and I thought of the women in my family who had never gotten married or had children. They were alone and sad. I was terrified of becoming like them.

When I finally let go of that relationship of 6 years, I felt like I had reached the surface of the ocean. Like the world had just rolled off my shoulders. I had been carrying all this emotional weight to the point that it had turned physical. I was 30 lbs overweight. I couldn’t look at myself in the mirror. I was destroyed. I needed to recharge with urgency.

So I took off to Paris because why not? And I had sex with a French man on my 37th birthday.

Suddenly, I felt like a kid in a candy store, like I could do anything! So I quit my job of 8 years and took off for 43 days to travel. I went to Italy, Germany, Czech Republic, Austria, and Hungary. I turned 38 in a club in Bologna getting free vanilla vodka shots from the bar owner. I danced with the owner of the Firenze train station and was hung-over the next morning. And I was happy.

At that time too, I decided it was time to forgive myself for everything and allow for a clean slate.

By 38, I was doing a lot. I launched myself as a photographer and I couldn’t believe how smooth things started flowing from there. I had 4 gallery showings within a year. I read a poem in front of an audience. I chose to change my body. I chose to become the best version of myself before I turned 40. I needed a massive makeover: physical, emotional, spiritual, mental…and then some.

Now I’m a few months away from the big 4-0. I haven’t found the man of my dreams, but I am the woman of mine. I don’t have the children that I had been longing for, but I’ve allowed myself to be a child again and stand under the sun and breath the ocean air and drive with the windows down. Every day became the best day. I didn’t recognize myself anymore and not because I became a redhead and lost those 30 lbs. I had found that person that was always there. I had come full circle. I had rescued myself. I had found peace.

So 40, bring it! I am not afraid of you, I love you and I embrace you. I embrace you like I embrace the lines on my face, the grays in my hair, and the scars on my heart. There’s no going back to where I’ve been, my 40s will be the best decade yet!

And to you my 30s, thank you. You showed me what true love really was. You shook me up and redefined “rolling with the punches.” I learned to listen to myself and to those who were there to offer their experiences and life lessons. I learned to stop beating myself up for my mistakes, but rather celebrate each of my accomplishments. I learned to let go and to trust that my life was going to be everything that I wanted to it to be.

Peruvian-born, Miami-resident, daughter, sister, friend, traveler, photographer, food-lover, drinker, spectacular. Check out her previous post in our blog: “Me at 38” and her amazing photographs at: flickr.com/bluedress7

P. S.: It’s A. K.’s birthday today! Let’s show her our love! Happy birthday, my dear Karina! Thanks for opening up and sharing the best of you with us! 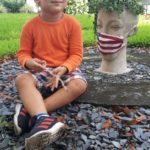 Helping Those Who Have Helped Us Before